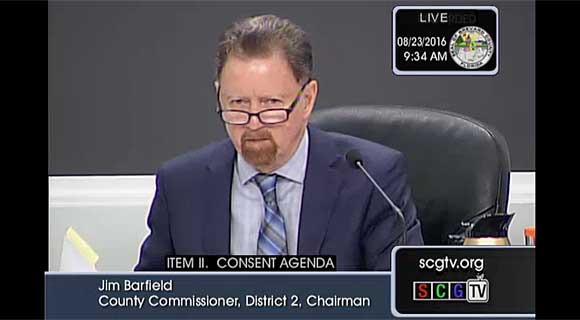 Almost one year to the day local political activist Matt Nye filed an ethics complaint against him for misstating his finances on his Form 6 financial disclosures, Brevard County District 2 Commissioner Jim Barfield’s representative stipulated at the January 19th Commission on Ethics meeting that he violated the Florida Constitution, Article II, Section 8, and Section 112.3144 of the Florida Statutes. Barfield agreed to pay a combined civil penalty of $1,750.

In January of last year District 3 Commissioner John Tobia proposed an ordinance that would require lobbyists to register with the county. The ordinance failed, with Commissioners Barfield, Pritchett and Smith voting against it.

“Commissioner Curt Smith went so far as to state it was a ‘solution in search of problem’ and stated Brevard County Commissioners were among the most ethical in the state”, Nye said. “Now the voters of Brevard County can see, and Commissioner Barfield must agree – by virtue of his settlement with the ethics commission – that is not the case.”

Barfield acknowledged during the investigation the figures he provided on his financial disclosures for certain accounts were an “estimate”, and that he didn’t spend the time to follow the instructions provided – he “just kind of glanced over them”. You can view the report in its entirety here or at the bottom of this post.

“Given the failure to follow instructions on something as simple as a Form 6, one cannot help but wonder what Commissioner Barfield has ‘glanced over’ during his time in office overseeing the county’s billion dollar budget,” Nye said. “Barfield ran, and was elected as, a brilliant self-made millionaire business owner, yet he can’t fill out a simple financial disclosure by himself without committing multiple ethics violations.”

Barfield’s comments to the investigator appear to convey a sense of arrogance and entitlement that seem to run rampant among elected officials at all levels. These elected officials seem to think the rules just don’t apply to them. Nye, a candidate for the Florida House seat currently held by Thad Altman, says he has had enough.

“Elected officials like Jim Barfield defraud the voters by running as fiscal conservatives, and then vote for more spending and every tax increase that comes their way once elected”, Nye said. “I have made it my personal mission to expose hypocrites like Commissioners Barfleld and Smith, just like I helped expose the criminal behavior of former Clerk of Courts Mitch Needelman.”

Barfield stated last November he would not seek re-election, after announcing he had won a large federal contract.

4_17004 Report of Investigation by Matthew Daniel Nye on Scribd

ABOUT US
Elect a watchdog, not a lapdog!
Contact us: [email protected]
FOLLOW US
© 2019 Matt Nye for State Representative, District 52. All Rights Reserved. Political advertisement paid for and approved by Matt Nye, Republican for Florida House, District 52.
MORE STORIES