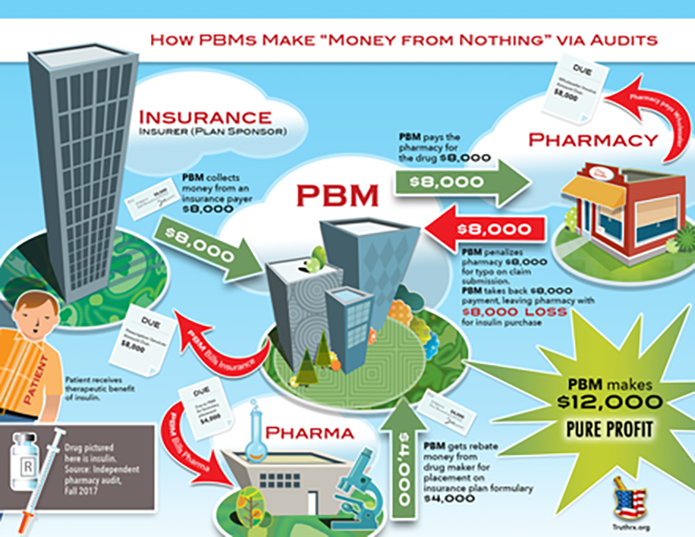 Yesterday I held a press conference at Lordoni Discount Pharmacy in Suntree to discuss a new report released this week that shows Pharmacy Benefit Managers have been gaming the state’s Medicaid system to the detriment of independently owned pharmacies, patients and the taxpayers of Florida. The report is embedded at the bottom of this article, and the full text of my speech is below the video.

Hello everyone. As Margaret said, my name is Matt Nye and I’m a candidate for the Florida House here in District 52. I want to thank everyone for coming out today, and especially Olu for allowing us to do this here. Independent pharmacy owners like Olu are an essential part of the fabric of our local communities, but if things don’t change, there is a very real possibility that independent pharmacies like Olu’s won’t exist much longer.

While there are many forces at work in the marketplace that drive acquisitions and cause consolidation, there is one very unnatural force at work here in Florida and across the country that is driving independent pharmacists out of business and driving prescription drug prices higher and higher. That force is a group called Pharmacy Benefit Managers, or PBMs.

PBMs say they provide value by working behind the scenes to work to keep drug prices low, yet the analysis released today shows that not only are they NOT keeping costs down, the PBMs have been gaming the system with government plans – paying the pharmacies they own more, and forcing their competitors – like my friend Olu – to sell prescriptions at cost, or even at a loss.

I am an advocate for free markets, and I normally abhor government interference in the marketplace, but the health care and prescription drug marketplace in Florida is distorted by the disproportionate consumer role the state’s Medicaid program plays. Florida’s Medicaid program involves total payments of over $12 billion per year, with 20-25% of this amount paid to pharmacies by managed care organization, or MCOs. The current system places a massive amount of money in the hands of a small group of MCOs, and these are taxpayer dollars that are being squandered.

The study results clearly demonstrate there are significant prescription drug pricing concerns within Florida’s Medicaid program that have a direct negative impact on pharmacies, patients, and taxpayers.

The current system does not treat all pharmacies equally nor allow them to compete on an even playing field. Instead, vertically integrated companies gain a significant advantage that allows them to set arbitrary prices for competing pharmacies and steer patients to PBM-affiliated pharmacies.

It should not come as a surprise that when in this position, the MCOs and PBMs that own pharmacies regularly pay those pharmacies significantly more than unaffiliated ones for the same drug in the same city at the same time.

Another pharmacy-owner friend of mine was robbed at gunpoint last year. The robber got $500 in cash and a bottle of pain pills. That same owner later had $3,000 extracted directly from his bank account with no warning by a PBM for what the PBM claimed were clerical errors. He had no say and no recourse. He told me that in a perverse way, he had more respect for the guy that robbed him than for the PBM, because at least the robber had to work for it, and wasn’t claiming to be doing it in the name of “keeping costs down”.

As I mentioned earlier, I detest regulation in business and in general, but with the amount of control these entities have on drug pricing through their contracts with the state, consumers and taxpayers deserve oversight and transparency. Drug pricing affects ALL of us and there is NO excuse NOT to have transparency in pricing and oversight of this critical piece of the healthcare system.

There are many in Tallahassee who have been there too long, and who don’t listen to the concerns of their constituents. Pharmacy owners, patients and other advocates have been ringing this bell, but it has been ignored. I want the citizens of House District 52 to know I am listening. This report proves what those advocates and my friends have been telling me for the last couple of years – that PBMs are playing the state and taxpayers for fools.

For more than a decade I have worked as a citizen watchdog here in Brevard to expose various schemes and scams. As a result of those efforts, several people have gone to jail, and several others have been found guilty of ethical violations and been forced to pay thousands of dollars in fines. I want to take that same passion to the state house to safeguard taxpayer dollars, and ensure the systems and large contracts can’t be gamed to the detriment of small business owners like Olu.

In closing, I’d like to point out that both Olu and I are active Rotarians here in the Suntree Rotary Club. We try to make decisions in both our personal and business lives based on the four way test, which is as follows:

I think anyone that reads this report will clearly see the PBM model fails on all four counts. If elected, I will ensure that any reforms enacted will answer yes to all those questions. Thank you.